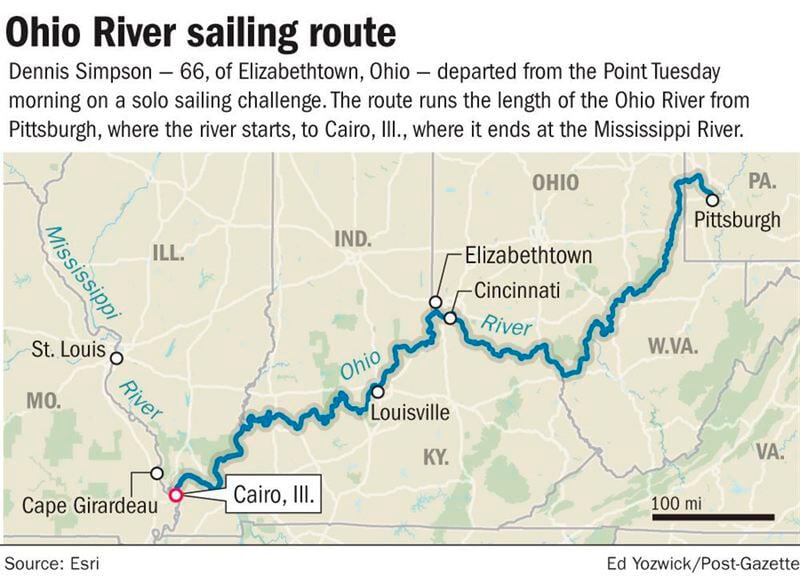 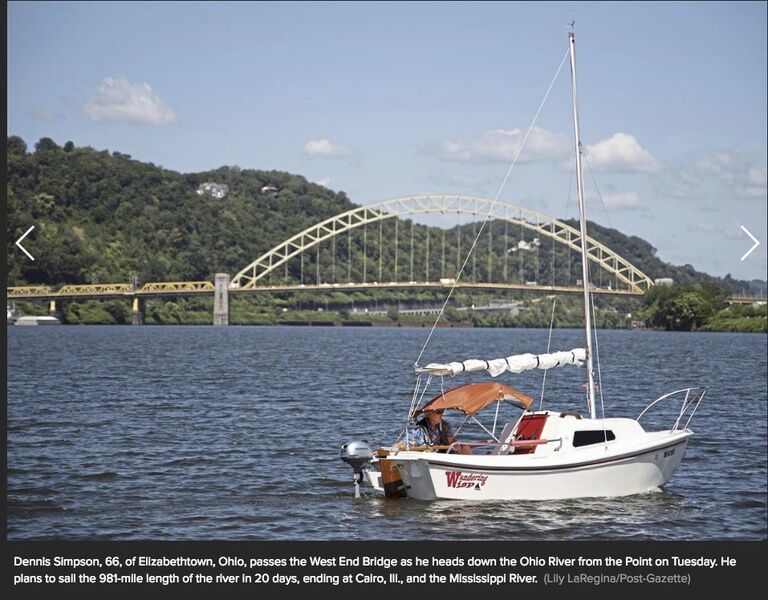 Lily LaRegina | Post-GazetteDennis Simpson, 66, of Elizabethtown, Ohio, passes the West End Bridge in Pittsburgh has he heads down the Ohio River from the Point. He plans to sale the 981-mile length of the river in 20 days, ending at Cairo, Ill., and the Mississippi River. 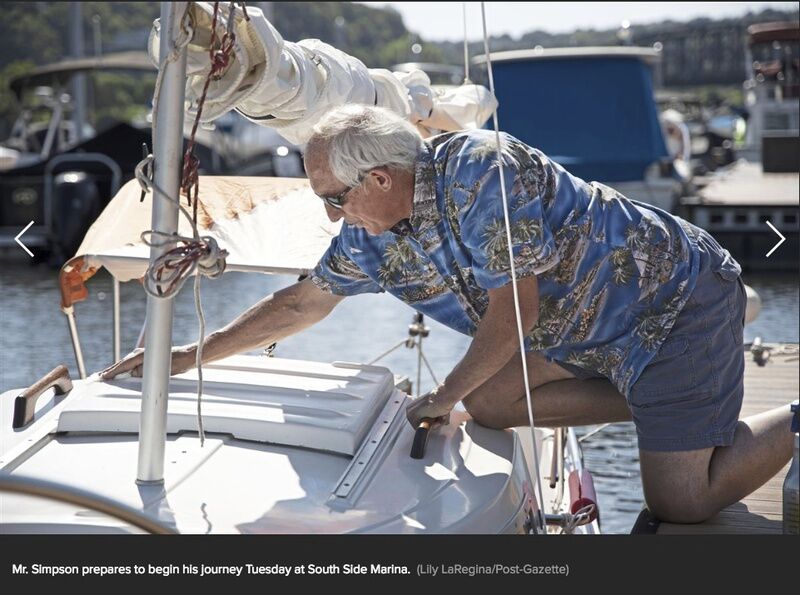 Lily LaRegina | Post-GazetteSimpson prepares to begin his journey down the Ohio River at Pittsburgh’s South Side Marina.

Lily LaRegina | Post-GazetteDennis Simpson, 66, of Elizabethtown, Ohio, passes the West End Bridge in Pittsburgh has he heads down the Ohio River from the Point. He plans to sale the 981-mile length of the river in 20 days, ending at Cairo, Ill., and the Mississippi River.

Lily LaRegina | Post-GazetteSimpson prepares to begin his journey down the Ohio River at Pittsburgh’s South Side Marina.

PITTSBURGH (AP) — Every summer, Dennis Simpson, 66, of Elizabethtown, Ohio, takes on a challenge that tests his endurance.

This summer of COVID-19, when just existing is testing the endurance of so many, he is solo sailing the length of the Ohio River, from its beginning at Pittsburgh’s Point to Cairo, Ill., where it flows into the Mississippi River.

“I’ll be socially distanced,” he said with a smile before heading out on an adventure that he expects to complete in 20 days. Simpson, who this year will start his 45th year as a teacher, needs to get back for the start of school.

He drove from his home outside of Cincinnati to drop off his boat, a 15-foot-long West Wight Potter, at South Side Marina. He drove back to have dinner out with his wife, Denise (they wore masks). He got a few hours’ sleep before getting up around 2:30 a.m. to drive back here, drop off gear and finish readying the boat so he could officially depart from the Point.

Alas, the wind was blowing from the west, so he didn’t start under sail.

This isn’t the first time he’s attempted to journey the entire 981 miles of the Ohio; he successfully navigated the river over the summers of 2012 and 2013 in a 16-foot-long kayak. Two previous attempts failed because, on one, his kayak’s pedal-paddle mechanism wore out and, on the other, he left a hatch open and water ruined some of his gear.

The successful trip he dedicated to his first wife of 33 years, Bonnie, his teenage sweetheart whom he’d just lost to cancer.

He’s had all sorts of adventures over the past 25 years, from running the Boston Marathon to bicycling across the country from the Pacific to the Atlantic. Last summer, he was certified as a power paragliding pilot in Indiana.

He is chronicling his journey at point2point.me, a blog that won over his current wife, who’d also lost her spouse to cancer. Even though his tiny sailboat sleeps two, she is not joining him. As he told her, “You wouldn’t want to. This is not a vacation. This is work.”

He’ll be under sail for 10 hours a day, sitting on a cushion at the stern of the boat, shaded from the sun by the Bimini top he rigged. A small solar panel attached to the stern charges his tablet and phone. He has a 2.3-horsepower outboard motor for when there’s no wind and paddles if all else fails. He has a marine radio and a waterproof camera; he tries to publish his images and daily dispatches by midnight each day.

The main hatch pulls down for use as a table where he’ll eat a lot of his meals — simple stuff such as peanut butter and jelly on tortillas, which keep better at “sea” than bread.

“I’ve learned a few things,” he says. “I’ve failed as many times as I’ve succeeded at this stuff.”

He’ll stop at small towns to refill his cooler and cupboard and to talk and meet people, which is his favorite part.

The boat is small enough that he can pull it up onto the shore to sleep at night, either inside the hull or under a tent and mosquito netting on deck.

Simpson planned this adventure before COVID-19 hit. He’d originally wanted to build a shanty boat — a little floating shack — but couldn’t find proper pontoons, so he decided to try sailing.

“I think everyone fantasizes about getting away,” he says, admitting he actually gets a little depressed just before these adventures. “Once I start, I’m fine.”

He teaches robotics at Princeton Community Middle School near Cincinnati but has mostlytaught at high schools. He’s been district and state teacher of the year and says he likes inspiring his students.

Sunning on the South Side dock Tuesday morning, he said his drive to push himself goes all the way back to his hardscrabble upbringing and to a teacher who was his cross-country coach.

“Just try to keep up,” he said to the teenager who became a very competitive runner and eventually coached cross-country himself.

Maybe that’s something that will come to him on the river, where things look different than they do from shore. Though he’s retracing his kayak route, he looks forward to seeing stuff he’s never seen. “I’m anticipating good things.”

He plans to pause at his home on Ohio’s Great Miami River, almost exactly the halfway point, because he needs to mow his 10 acres as well as the lawn at his church.

Then, if all goes according to plan, he and the Wandering Wisp will slide back out into the current of the bigger river, into whatever wind is blowing, and keep going.