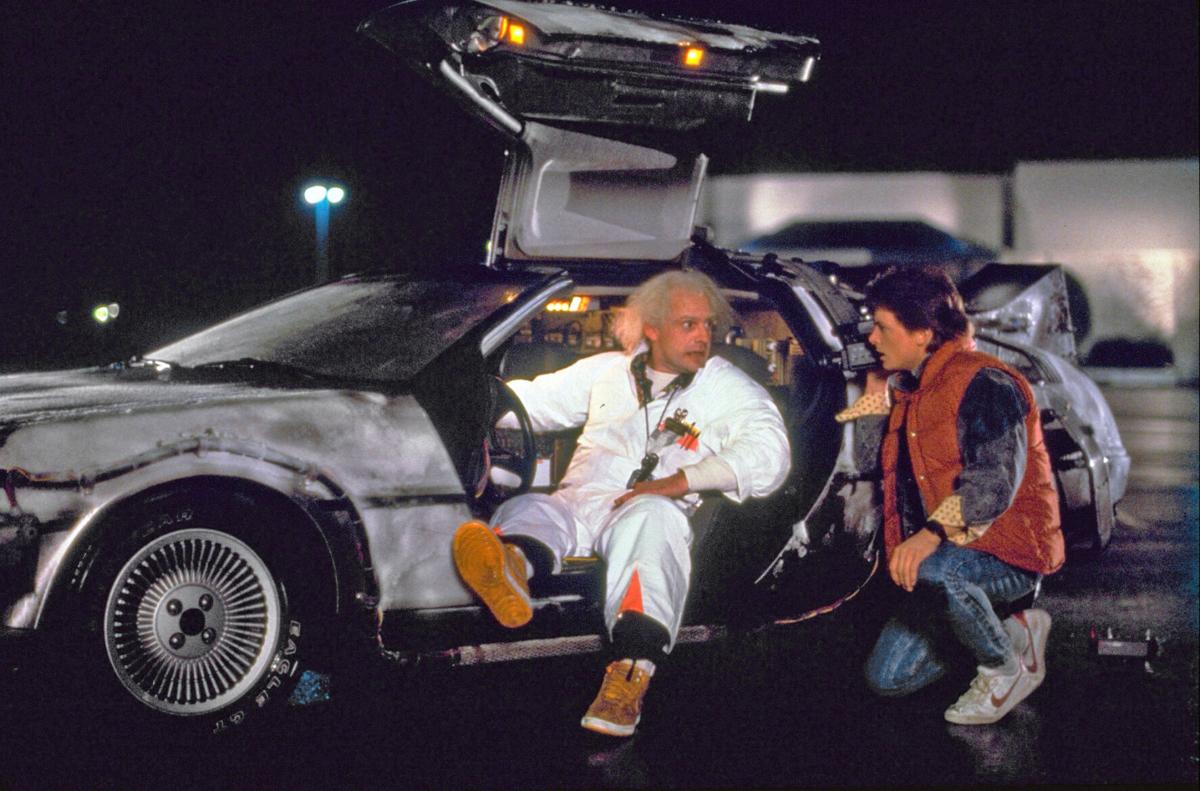 Not to worry: the year 2020 is badly broken, but the brief existance of murder hornets proves that time travel is possible and that someone is trying to fix the problem. It's just that they keep altering the space-time continuum with unexpected results. 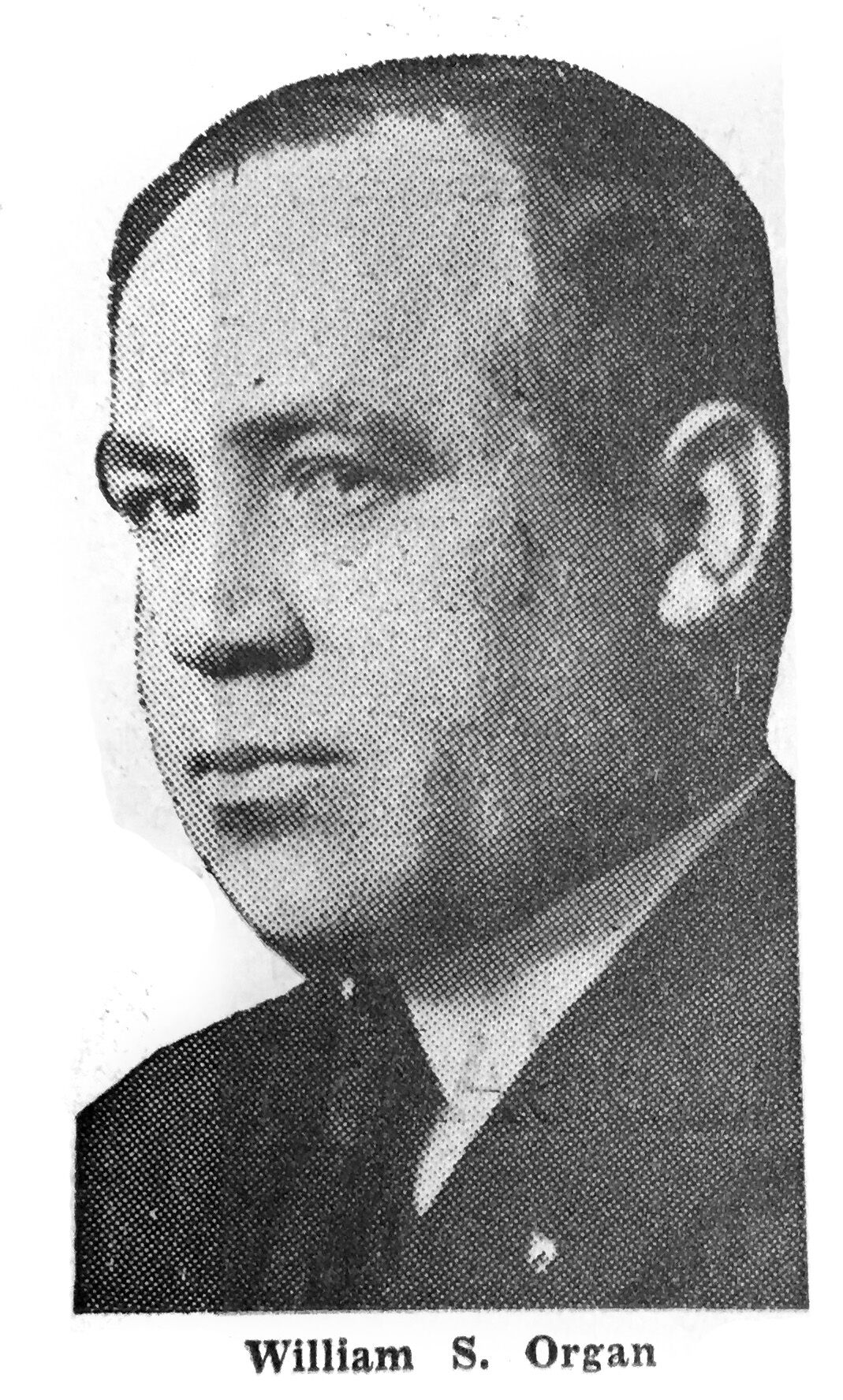 Billy Organ, then publisher of The Herald, met his demise on Christmas Eve a century ago when he was struck by a freight train in downtown Sharon. Like modern society and the year 2020, he never saw it coming. 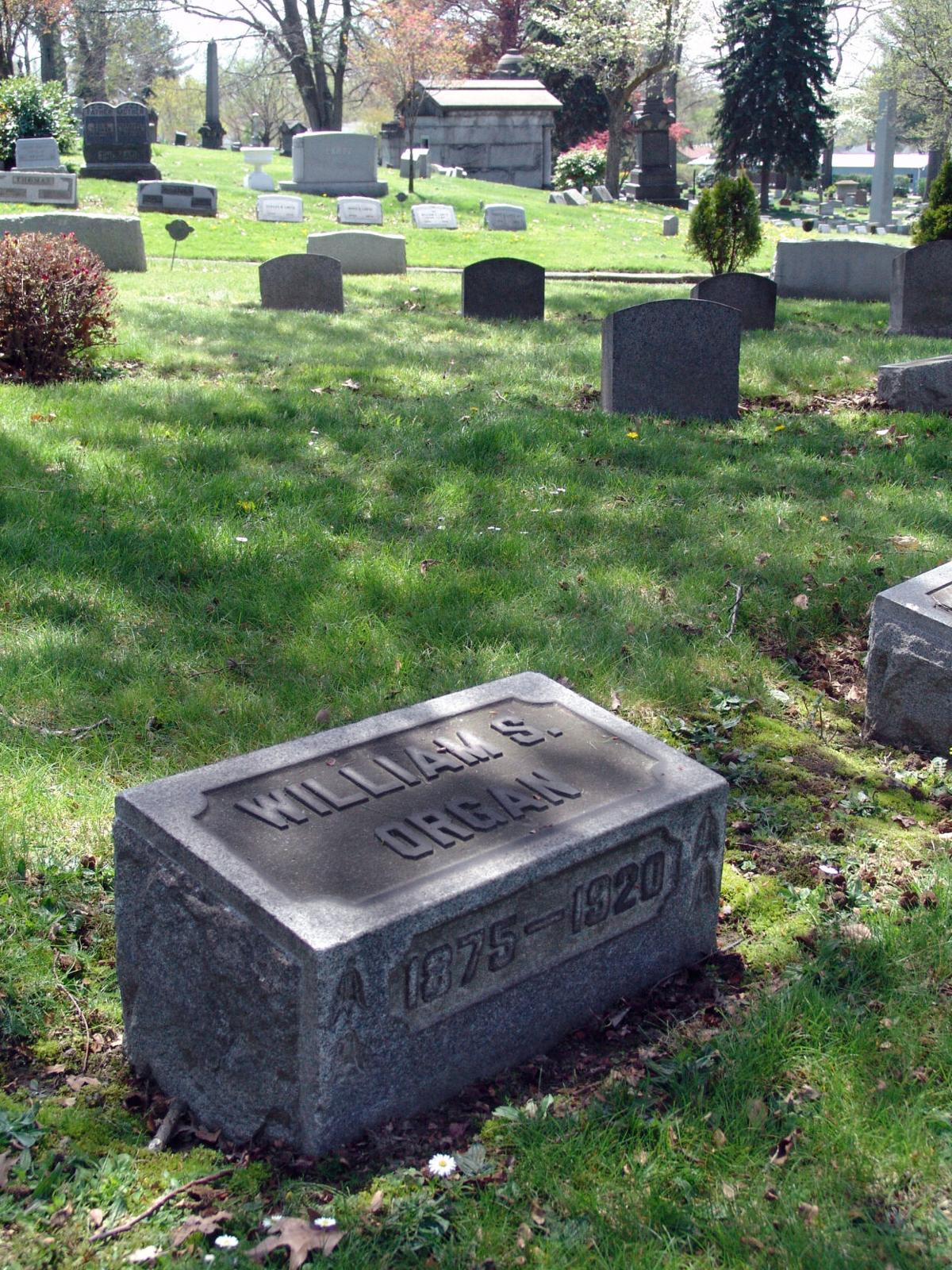 Billy Organ lies in slumber today in Oakwood Cemetery in Hermitage. Organ, then publisher of The Herald, met his demise on Christmas Eve a century ago when he was struck by a freight train in downtown Sharon. Like modern society and the year 2020, he never saw it coming. 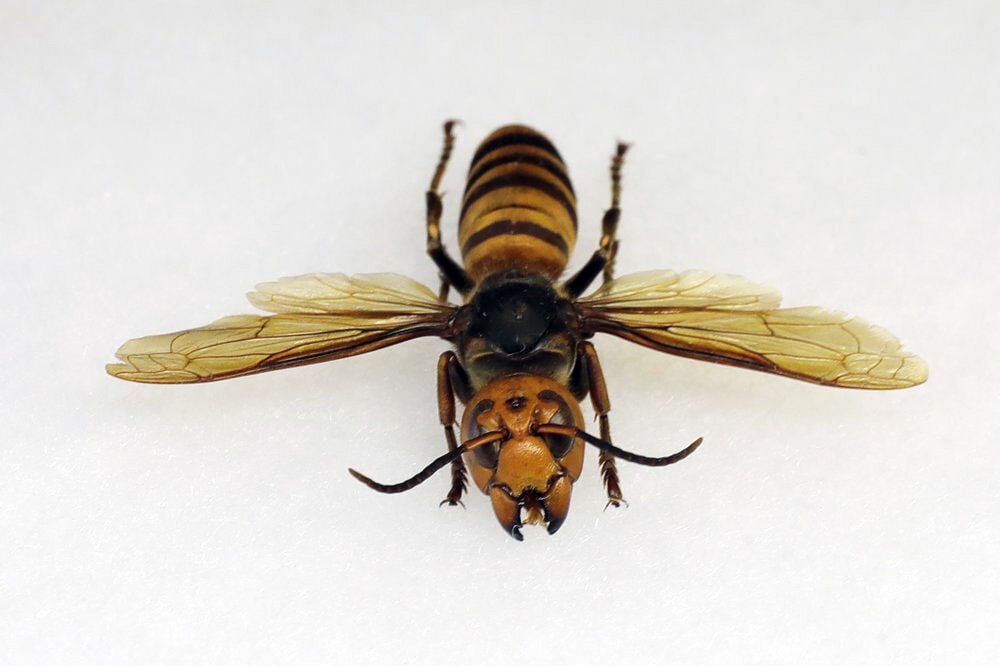 The Asian giant hornet dubbed the "Murder Hornet" was a big deal when it showed up in Washington state. Was this mutant’s existence just a consequence of someone trying to fix 2020 but upsetting the space-time continuum? 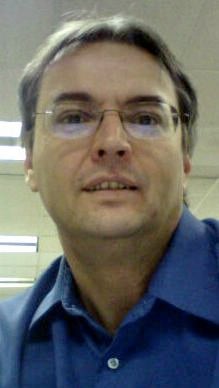 Billy Organ was a man in a hurry on Christmas Eve,1920. He had to catch a train from Sharon to Niles, Ohio, for a gig playing drums with the Cave Orchestra.

The well-known, 45-year-old Organ – whose day job was president and publisher of The Herald – reached the railroad crossing at East State and Railroad streets in downtown Sharon and found the gates lowered as a freight train approached. Organ thought he could make time by going under the gates and crossing the tracks before the train reached the crossing.

He stepped forward, then became history.

He didn’t expect another freight train coming in the other direction on the other set of tracks. Something on that train struck him on the back of the head, knocking him to the ground and fracturing his skull. He died Christmas morning.

Fast forward exactly a century to 2020. A world turned upside down. As they say in garage-sale classified ads, this year’s litany of otherwise unimaginable events is just “too numerous to list.”

As viral pandemic paralyzed society, the Pentagon released UFO videos, and the National Weather Service warned of a fire tornado in California. Mysterious metal monoliths appeared throughout the West. Toilet paper sales were restricted to one package per customer.

Oh, yeah: And the president of the United States was impeached and acquitted, an event that barely makes the Top 10 lists of bizarre news events. Someday, schoolchildren may learn about it in school. Or in their kitchens, if that’s where they still may be getting their schooling.

We saw none of this coming. And we can’t wait for it to pass.

Each life changed in its own way, affected by the pandemic or just from the fates of the year 2020. Some poor souls suffered from every direction in ways they may never recover from, particularly financially. My heart aches for them.

My 2020 crises weren’t directly from the pandemic, but were complicated by it every time I turned around to remember, oh, yeah, you can’t get that done because of the pandemic.

Mid-year I simply shut down, failing to take on new projects and often wishing I could just curl into a ball on the floor. The activities that bring joy to my life – such as leading Sharon Historical Society downtown Sharon tours during WaterFire Sharon events – were cancelled. Then dealing with a series of family crises became a full-time job unto itself.

On a single day in June I placed both octogenarian parents into nursing home care — dad for memory issues, mom for short-term rehab after a fall. For safety reasons, I had to drop them off at the door, like leaving stray cats at the pound.

A few days later, my niece called in a panic at 2 a.m. A tractor-trailer had slammed into the corner of my boyhood home, where she and her family now live. I still haven’t been able to settle that insurance claim on behalf of my parents, as their power of attorney.

Then dad died unexpectedly a month later of complications from a series of seemingly harmless falls. Mom came through rehab but for half a year has been trapped in her beloved home (where the temperature is always a balmy 78 degrees, June or January). I think I’ve made a whopping 17 or 18 two-hour drives to my hometown in the past six months and spent more than six or eight weeks on the ground, rarely afforded any leisure time to enjoy my favorite town in the world.

A strange highlight of the summer was writing dad’s obituary, a lengthy one full of his lifetime of accomplishments. I labored over each word and take great pride in the tribute I produced. I remember its importance with each Herald obituary I edit and with each obituary photo I retone to make it just right.

I am not alone in my loss. During a single week this month, six workplace friends or recent retirees lost a parent, grandparent, spouse or sibling. COVID-19 claimed at least four of them.

In recent days I’ve found my work shifts consumed by editing other people’s obituaries. Monday probably was a 157-year Herald record with 28 obits that stretched over three and a half pages. We had to add pages to the edition to fit them all in.

But let’s talk about something more hopeful, like murder hornets.

They’re the larger-than-life invasive species discovered earlier this year in the Pacific Northwest. They could kill an elephant just by buzzing nearby, or something like that. And it was to be only a matter of time before they swarmed the country. Just what we needed in 2020, insult to injury.

Yet, what happened to murder hornets? The threat came and went. Have you read about them lately? I haven’t. The only stingers in the news lately is the joyous news about injections of modern-miracle coronavirus vaccines.

So, as for those murder hornets. Four words: Time travel IS possible.

I can’t take credit for this, but someone on the inner-tubes postulated that murder hornets are proof that time travel exists.

The mutant species is a sign of hope: Their existence shows someone is working on the world’s problems through time travel, trying — albeit without much luck — to reset the universe. OK, so they stepped on the wrong butterfly in the process and messed up the space-time continuum. But they’re working on it.

In the meantime, I fret over what life as we know it has become. Not just the country that doesn’t match what we were taught in ninth-grade civics. The country devoid of the God-given right to shop at Walmart at 3:30 in the morning.

Heck, go ahead, try to buy a take-out pizza after 9 at night.

I miss concerts. I miss being able to book a weekend bus trip to Manhattan to see a Broadway musical and to drink a beer and eat a soft pretzel at a table in Times Square on an October afternoon.

I miss shaking hands. Yes, just shaking hands, in friendship or thanks or to seal a deal. Or in commencing a curling match, the ice sport I’ve partaken of in Pittsburgh for a decade. All that time we strove to build a multimillion-dollar ice palace of our own, which we opened last spring then promptly closed then reopened then closed again. I’ve only played on its perfect ice maybe a half-dozen times.

I miss vacationing in Myrtle Beach, or simply staying in any hotel. I miss shopping just for the sake of shopping. And while out, I miss being able to recognize anyone by their face. And, as my hearing starts to fade, I miss hearing the words of people who speak softly, now further filtered by cloth.

Throughout all this, I find myself living more for the moment, doing what it takes to make myself feel better and starting to acknowledging my mortality at a relatively youthful 62 (though I hope to last at least four more decades and break the family record of 102).

Don’t we simply deserve any extra semblance of normality, reward, or taste of life from Before Times?

Sleeping that extra hour. Popping the tab on another can of lager. Taking a snow day (in September). Ordering an iPhone12 Pro the day it goes on sale.

I miss rock concerts. Some really good bands were coming to the region in 2020. I fear many of these ‘70s artists – in their 70s themselves – may kick the bucket before I cross them off my bucket list.

I miss going into a restaurant, bank or doctor’s office and not feeling they lost their lease and are packing up to leave — furniture, magazines, brochures, all swept away, seating areas roped off.

I miss not having to play trick-or-treat in public, trying to guess the identity of the masked person talking to me like a longtime friend. It probably is, but I don’t recognized the north half of the face. Calling hours for dad were a challenge.

Back in March, I recall one night looking out into the darkness over downtown Sharon from the East Hill, fearing The Virus lay out there, somewhere. Had it arrived yet in the Shenango Valley? It felt like the invisible but deadly nuclear radiation I grew up fearing in the ‘60s, back when taking a pioneer inoculation meant going with your family to a community clinic and ingesting a sugar cube dampened by drops of polio vaccine.

Today I go into offices where someone with a Clorox wipe follows me to the door and wipes down the latch and door nob for the invisible demons, just as the abridged menus at chain restaurants now come one to a table on laminated paper with dampness from a waitress swooshing each page after the last customer. Sanitized for your protection, as the paper Holiday Inn toilet sash used to say.

The year 2020 is a mess. Like many, I’ve simply grown to abandon it as a total loss, a write off. Let old acquaintance be forgot.

Like Billy Organ, no one saw 2020 coming. But everyone will be glad to see it go. Good riddance.

In the meantime, before crossing the tracks, let’s all stop, look and listen.

JOHN ZAVINSKI is The Herald’s assistant editor for graphics. Email him at jzavinski@sharonherald.com.