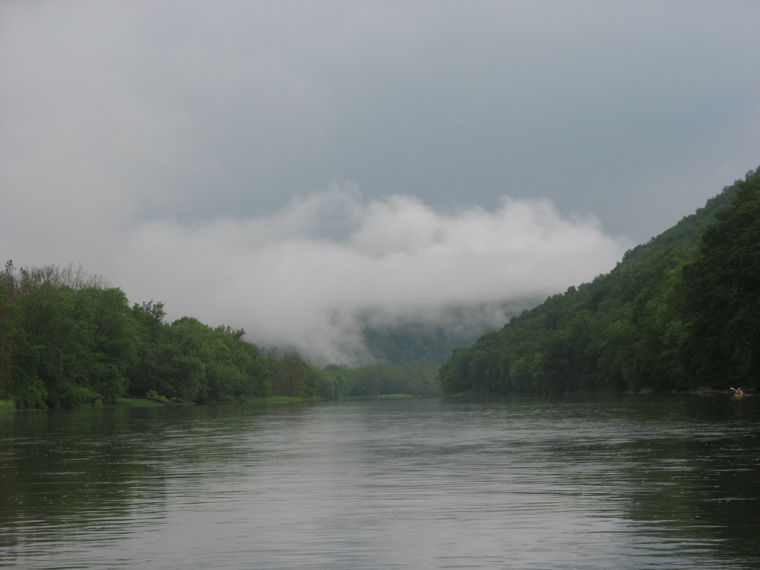 The misty, overcast Allegheny River on Saturday afternoon at the beginning of the overnight trip. 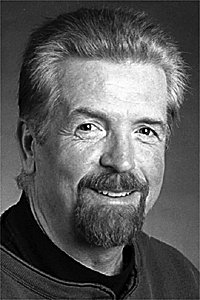 The misty, overcast Allegheny River on Saturday afternoon at the beginning of the overnight trip.

As Todd and I pushed our canoe into the river, we saw how heavily-laden it was. Dome tents, sleeping bags, a cooler full of food and drinks and bundles of clothing and gear filled up the wide-hulled 14-foot watercraft, along with cleaning stuff and plenty of trash bags. When you plan to camp overnight on one of the Allegheny National Forest islands, you want to make sure you leave no trace behind. We put in near Buckaloons Campground north of Dunn’s Eddy on Saturday, but not until 4 p.m. We’d been delayed for hours by thunderstorms, but now, finally, the tempests had passed, and we were on the river. Donna Rai’ moved quickly downstream in her sleek new camo-colored kayak, and Brad followed right behind in his tiny whitewater craft. Todd and I brought up the rear in our heavy freight canoe. Over 100 islands populate the Middle Allegheny River corridor from Kinzua Dam downstream to Oil City, and seven of them totaling 368 acres between Buckaloons and Tionesta comprise the Allegheny Islands Wilderness, the smallest federally-designated wilderness in the country. There are no facilities on any of these lush green isles, but rough camping in the wild is permitted, and that’s what we had in mind. We paddled six miles downstream over the next couple of hours and enjoyed the scenery, with mist hanging on high green ridges above the powerful gray river under cool, cloudy skies. At 6:30 we put in at the downstream point of R. Thompson Island, a 30-acre federal sanctuary near the onshore village of Althom. We hauled gear, put up our dome tents and began gathering rain-soaked firewood. It would have been easier to bring dry firewood from home, but that’s unethical and prohibited in the ANF right now because of the emerald ash borer, an invasive insect from Asia that kills ash trees. The ash borer is a weak flyer, but it has traveled across much of the eastern U.S by hitchhiking in firewood that campers have carried from place to place. ANF officials will levy fines and penalties to individuals who knowingly violate the prohibition. We weren’t carrying any illegal firewood, but we did bring one artificial fireplace log, which burned hot enough and long enough to dry the wet branches we’d gathered and render them burnable. Hey, we weren’t exactly pioneers out there and a little technology helped a lot. We named our campsite Muddy Point because of the wet conditions, but it was a great spot, with high level ground for two tents and a large stone campfire ring. From 7 p.m. until midnight, we feasted on hot dogs and snacks and cold beverages and laughed out loud and told stories beside the bonfire in the dark forest night, lively waters flowing past us on both sides. In the morning we awoke to the outdoor melodies of birdsong in the trees, rushing river waters and the daybreak quacking of common mergansers hurtling upstream just above the riffles. We broke camp and cleaned up every particle of mess we could find, including three pop cans and several candy wrappers left by prior visitors to the site. This was a precious national forest wilderness, and we were determined to leave it even more pristine than we found it. Then we paddled seven more miles downstream in the bright morning sunshine to the town of Tidioute, where we’d parked a vehicle the day before. Along the way we spotted two immature bald eagles soaring above the treetops. Todd got a good photo of one when it perched on an oak crag above the river and I steered the canoe right under it. We also got great pictures of a hen merganser leading her fluttering troupe of six fuzzy ducklings along the shoreline. We didn’t fish much, but we did get a couple of undersized smallmouth bass on crankbait lures. This was the first overnight island camping trip in the 22-year history of F-Troop Camp, and we had a grand time. D-Rai’ and I plan to do it again when we go up on vacation in July. Good luck out there. And have a great week outdoors. Don Feigert is the outdoors writer for THE HERALD and the ALLIED NEWS. He can be contacted at 724-931-1699 or dfeigert@verizon.net. Visit his Website at www.donfeigert.com.