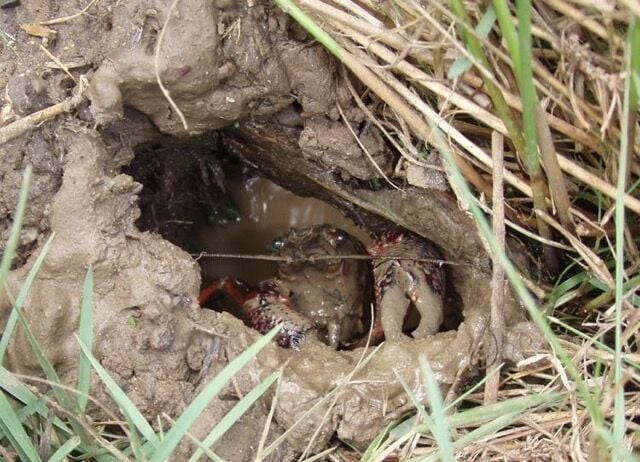 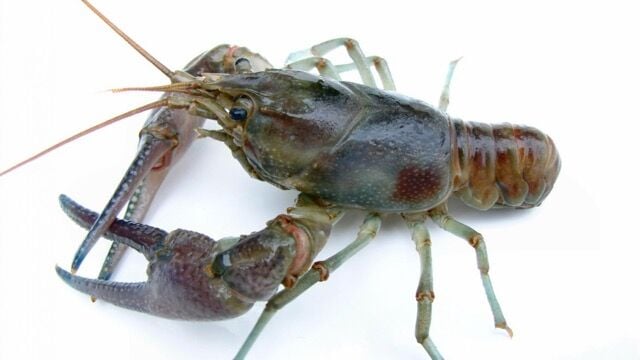 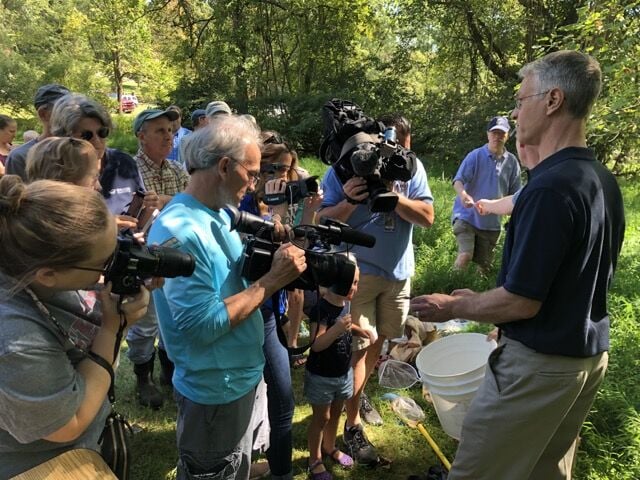 Dr. David Lieb, biologist for the Fish and Boat Commission, displays crayfish for a group of people.

Dr. David Lieb, biologist for the Fish and Boat Commission, displays crayfish for a group of people.

A violent battle rages in waterways throughout Pennsylvania, as native crayfish increasingly are wiped out by invasive exotic species such as the rusty crayfish – a transplant from the Ohio River basin.

“On one trip, I actually witnessed a rusty crayfish battling a native species, and the rusty crayfish pinched off the face of its enemy,” said Dr. Dave Lieb, biologist for the Fish and Boat Commission who has been studying crayfish populations and behaviors since 2003. “The exotic species are larger and more aggressive, and there is a fight for the best rocks and habitat within our creeks and rivers. Unfortunately, the native species are getting eradicated, either through losing battles with exotic species or, when displaced from their safe spots, become food for various types of fish.”

After earning his PhD at Penn State, Lieb was involved with an ecological study looking at predator-prey relations, including crayfish and fish interactions. Looking through literature available at that time, he noticed there was very little updated information since the early 1900s.

“We secured some grants to look at what was going on in our streams, and what I found was a massive change in crayfish populations. Our native species were gone in wide swaths of Pennsylvania,” he said. “I’ve been in streams within our state where the switch from all native to all exotic occurs in less than 10 years.”

Crayfish play an integral role within the aquatic ecosystem.

“They eat smaller macroinvertebrates, and offer a type of energy transfer. Large brown trout or smallmouth bass would have a hard time making a living eating tiny macroinvertebrates such as midges. Crayfish do that for them, and then the fish eat the crayfish,” said Lieb. “Crayfish offer an essential energy transfer through the greater food chain to fish, birds, raccoons and other species that live along the water.”

Crayfish are also the epitome of an omnivore species, which is why they are so prevalent in many areas, Lieb adds.

“They switch food items – when they eat all the macroinvertebrates, they can switch to algae, and then switch to leaves or other species,” he said. “They are very robust consumers.”

Crayfish also offer an important litmus test for potential water quality issues. While they are not as sensitive to pollutants as something like a mayfly, Lieb admitted, they still can function as a red flag of potential issues, especially habitat destruction.

“Erosion issues can lead to additional sediment entering a stream, and as rocks are covered up by the sediment, the crayfish population can disappear,” he said.

Numbers of crayfish have fluctuated because of that, with some veteran anglers noticing a decline in numbers along the Susquehanna River.

“I don’t see as many as I once did,” said John Oast, of Bloomsburg, an active fishing YouTube personality with fishyaker.com. “They have been super vital to the smallmouth fishery, and I used to regularly catch bass with them still in their gullet. As of late, I see more signs of crayfish eating smaller fish than I did in the past.”

In North America, there are more than 450 species of crayfish, however many of those species are narrowly distributed.

“Some may only exist in one or two watersheds, and if you lose a particular watershed – or an exotic species takes over – some of these rarer crayfish species can disappear completely from the face of the earth,” said Lieb.

In Pennsylvania, there are a number of terrestrial species of crayfish which live mostly on land and burrow in wetter areas down to the groundwater, which then floods the tunnel and create a unique habitat that benefits more than just the crayfish that create them.

“Ecologically, their burrows create habitat for various species of snakes and other creatures that live dependent on the work of these crayfish,” Lieb said. “It is amazing how it can all interconnect.”

The invasion of the rusty crayfish and other exotic species in our region’s waterways can have a similar ripple effect within the greater ecosystem, Lieb added.

“The exotic species are larger, eat more and grow very quickly. As these wipe out the smaller, slower-growing native options, we are seeing it impact fish populations. The exotic species grow too big too fast for many of the smaller fish species to consume them,” he said. “Sunfish, rock bass and brook trout are being negatively affected – in some areas, we are seeing a large reduction in fish biomass because of this.”

Which is why Lieb urges everyone – especially anglers – to not redistribute crayfish beyond their immediate range.

“I assume the person who first introduced rusty crayfish didn’t realize his or her actions would end up wiping out native species from an entire drainage area,” he said.

More recent regulations make it illegal for anglers to transport crayfish between watersheds. They can be caught and used in the same stream, but they can’t be moved elsewhere.

• A hard exoskeleton protects crayfish. Crayfish must shed, or molt, as they grow. Those empty “crayfish shells” you see in the water are really shed exoskeletons. Crayfish are very soft until the exoskeleton hardens. These “softshells” are vulnerable to predators.

• Crayfish have amazing adaptations. They breathe through gills under the carapace. Their eyes are on movable stalks to allow sight in different directions. Antennae sense prey and predators. They emit chemical cues to identify one another and signal mating. They can even change color to match their habitat.

• Crayfish are easy to catch. Look for them in any pond, lake, river or stream. Roll rocks over in shallow water and grab behind the pincers (thorax), or use a dip net. Or have one angler hold a minnow seine while another angler lifts rocks and swooshes crayfish downstream toward the net.

• Crayfish are also easy to store. Use a cooler with wet grass or aquatic plants instead of a bait bucket with water. They’ll keep for days if you store them in a cool shady spot and keep the grass wet. Wrap softshells in wet newspaper, cheesecloth or cotton material. Store them in the refrigerator and they will stay soft for a week.

• A fishing license is required of those 16 and older to collect crayfish and other fish bait or baitfish.

• There is no closed season or minimum size for crayfish. Pennsylvania law allows a daily limit of 50 combined fishbait species.

There are at least a dozen species of crayfish connected to waterways in Pennsylvania. Among them are the following:

JOHN ZAKTANSKY is a writer at The Daily Item in Sunbury