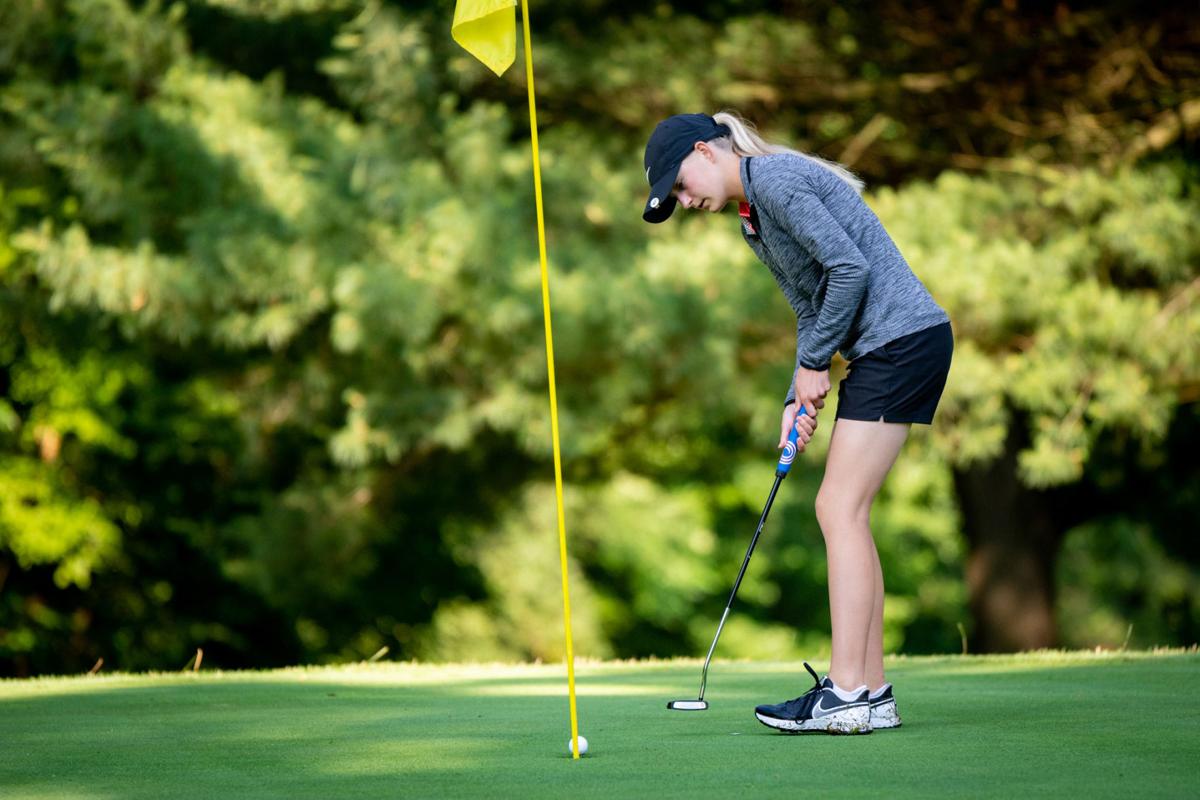 McKenzie Gustas putts on Wednesday during the opening round of the 72nd annual Herald-Tam O’Shanter Junior Golf Tournament. 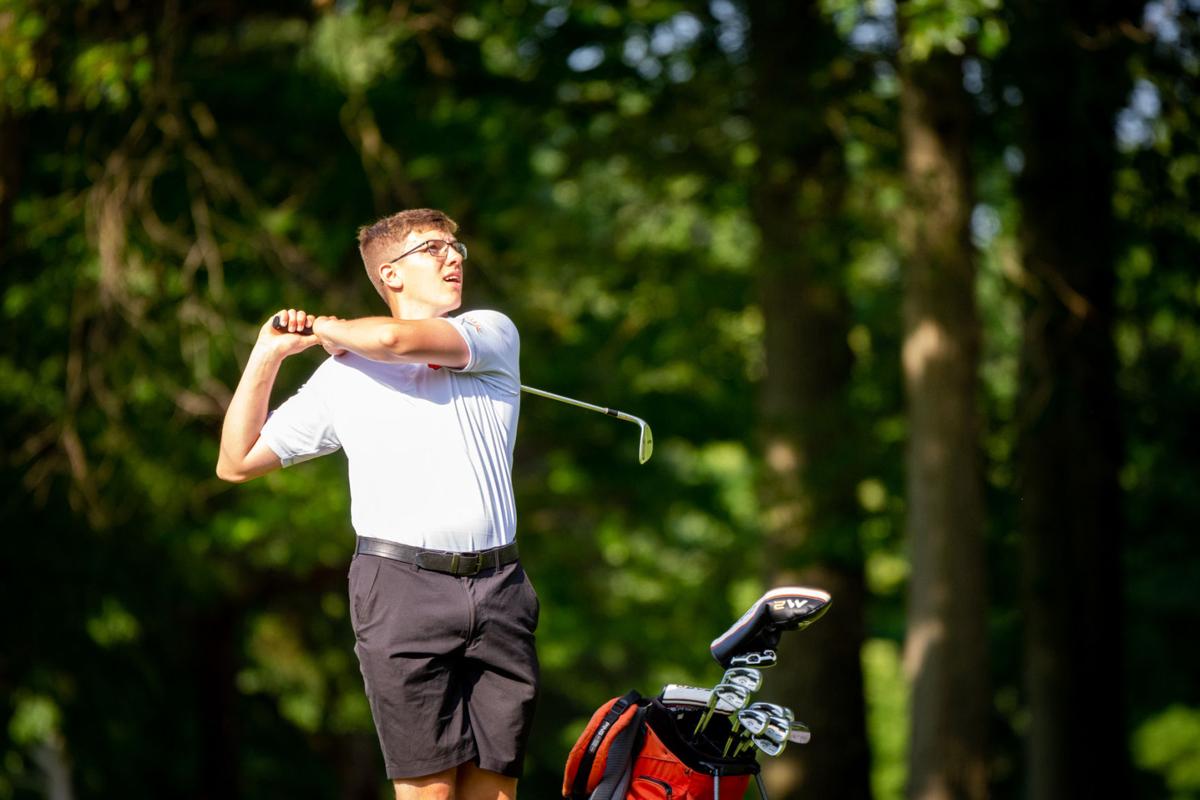 McKenzie Gustas putts on Wednesday during the opening round of the 72nd annual Herald-Tam O’Shanter Junior Golf Tournament.

HERMITAGE – Hickory High girls’ golf has become one of the PIAA’s premier programs. That was evidenced during Wednesday’s opening round of the 72nd annual Herald-Tam O’Shanter Junior Tournament.

On an otherwise clear, cool day a westerly wind blew at approximately 10-to-12 miles-per-hour, which the leaders found not too troubling. Tamie serves as home course for Hickory and Sharon’s scholastic teams.

Both Benson and Gustas are part of Coach Craig Antush’s Hickory High team that ended as the 2019 Class 2A state runner-up to Greensburg Central Catholic. And as a 3-time PIAA Championships qualifier, Benson was not bothered being the reigning medalist of the Tamie tourney.

“Honestly? Not as much pressure as I was expecting. I mean, I didn’t have the best round, but I didn’t have the worst round. I played with what I had and made do, so I can’t complain,” the diminutive Benson related, later adding, “I was more excited, not nervous.”

On the final hole of Wednesday’s round Benson belted the ball from approximately 135 yards to within 6 feet of the cup. With a defiant, bushy-tailed squirrel scurrying within her sight line of the hole, Benson’s putt came up just shy so she settled for a tap-in.

“I would say my strong suit is my approach shots, ‘cause I know I can stick it close to the hole for a short putt,” Benson began. “And for this course, ‘cause I’ve played it so much, I’ve definitely learned where to put the ball and how to get it off the tee correctly. So my approach shots really help me out in getting to the green.”

Benson, from under the brim of her visor, said with a smile, “Just think: It’s a huge target, so you’ve just gotta go for some part of it, you know? So it definitely plays to my advantage, I’d say.”

Assessing her round, the tall, athletic Gustas said, “I chipped and putted really well. I hadn’t been doing that the last few weeks, so I took some time and practiced. So I, pretty much, chipped and one-putted when I made a mistake with either my driver or iron.

“The wind played a big part on the back (nine),” Gustas admitted. “On this last par-3 it actually kind’ve blew my ball over into the sand and I had to hit it out of the sand to get par. But the first nine (holes) was beautiful, and it wasn’t hot (Wednesday).”

Allowing for the wind, Benson admitted, “A little bit. Through the back nine it kind’ve picked up a little bit. But it wasn’t so bad that it affected the ball too much. Of course, a back wind is going to hold the ball back – you might have to ‘club up’ – but it wasn’t much of a factor (Wednes)day.”

Gustas’ game is predicated on “more practicing than playing,” and she was somewhat limited during the COVID-19 pandemic restrictions placed on Pennsylvania courses.

Assessing Tamie, she said, “The greens are forgiving, but it’s really tough to keep your ball out of the trees and out of trouble. ... I didn’t really have a strength (Wednes)day, but chipping and putting really helped me. A lot of times my irons really help me on some of the more open courses. But here, chipping and putting is where you can save a lot of strokes.”

Cattron characterized his “pretty good” round thusly: “I started off well. I want to say I was even through six. Then I had a birdie and bogey here and went two-over on the front (nine). On the back (nine) I was playin’ great ... until hole fourteen. Hole fourteen I got a bogey – I was even up ‘til then. I kind’ve rallied back with two birdies, and then I finished two-over on the back, as well.”

Continuing, Cattron related, “It was ‘Death Valley.’ On that hole there was some pretty heavy back-wind, so I just took a fifty-six degree (sand wedge) and happened to stick it, so I was really happy about that. ... There was not too much wind in my face.

“I’m really familiar with the course, which helped me a lot,” the soft-spoken, bespectacled Cattron continued. “The strong suit of my game, I would say, are my middle irons. (Wednes)day my approach shots were right on, so there was nothing I could complain about my middle-iron shots. It definitely lent itself (Wednes)day.”

Tam O’Shanter Director of Golf John Kerins said today’s round should proceed a little faster than Wednesday’s. The forecast is for 77 degrees and partly sunny skies.

“I’m excited moving into to(day),” confided Cattron. “Hopefully I can do the same thing: Shoot low, try to hold off the bogeys, and ... I don’t know, we’ll see. Hopefully I do well.”

“I’ve just gotta play my game (today) – the old ball through the club and get it out there,” Benson assessed.

Frances E. Astone DiFeo, 90, of Sharon, passed away on Wednesday (7-1-20) in Sharon Regional Medical Center, Sharon. She was born on May 5, 1930, in Sharon to Carmelo and Rosalie S. Oliver Astone. She graduated from Sharon High School. She was married to Henry C. DiFeo; he passed away. Franc…