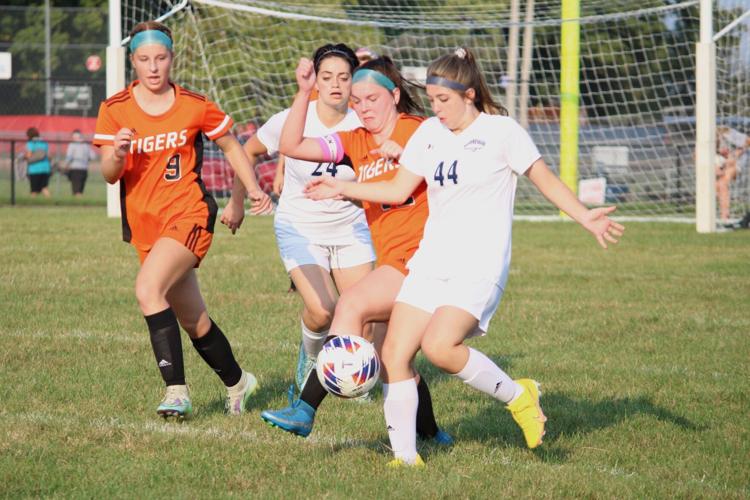 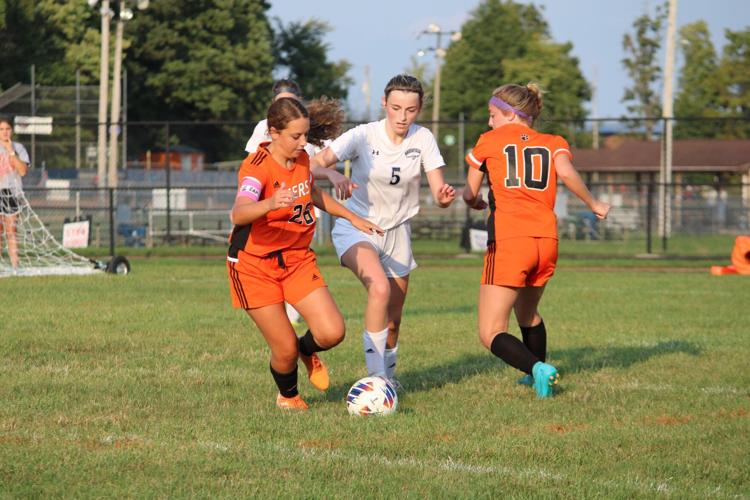 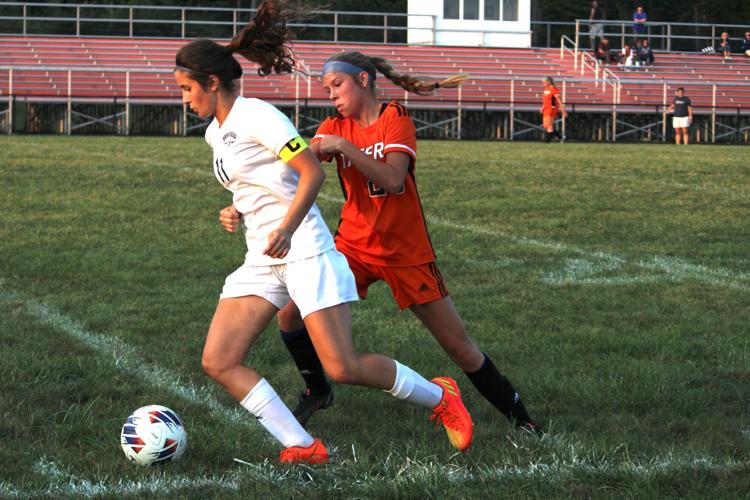 Brookfield’s Sophia Hook (11) turns the corner against Springfield’s Emma Sanders while along the sideline during a game Wednesday at Springfield High School.

Brookfield’s Sophia Hook (11) turns the corner against Springfield’s Emma Sanders while along the sideline during a game Wednesday at Springfield High School.

NEW MIDDLETOWN, Ohio – The Brookfield girls soccer team was on the receiving end of three quick scores. The Warriors’ defense tightened up, but it was too much to overcome Wednesday evening.

Springfield got the better of Brookfield 6-0 at Springfield High School in a Mahoning Valley Athletic Conference matchup.

Sami Shaffer and Brionna Holt scored two goals each for the Tigers. Maddie Page and Ava Vecchione each scored once. Holt also had an assist.

Madeline Pisarcik made four stops for the Warriors, including a save on a penalty kick in the beginning of the second half.

The Tigers (5-2-2) didn’t waste time getting on the board. Shaffer took a pass from Holt and deposited the ball in the net less than nine minutes into the match. Page scored an unassisted goal 30 seconds later, and Shaffer tallied her second score to bring Springfield’s offensive barrage to close.

Following the three-goal outburst, the Warriors (3-4) settled down. The defense kept the Tigers off the board until Vecchione scored with 16:21 to play in the first half.

Springfield scored a pair quickly in the second half as well. Holt scored back-to-back goals in a five minute span – with 32:09 and 27:02 remaining in the match.

Brookfield head coach Erin Warrender said the adjustments on defense after the early scores focused on maintaining their defensive marks and slowing everything down.

“We played a little loose on them tonight, too,” Warrender said. “And I think that was a big part of them gaining an advantage over us in the beginning.”

The Warriors couldn’t break through Springfield’s defense. Specifically, they couldn’t get open shooting lanes against the Tigers’ back line.

“A little tough getting it into the center, and the couple opportunities we had didn’t go in either. That was another issue, too,” Warrender said. “We gotta tighten up our shooting a little bit, too. We had, probably, a solid two or three shots that could’ve been goals, easy, if we had it down right.”

The loss was in conference, but not in the Warriors’ tier. Springfield is a part of the MVAC Scarlet while the Warriors are in the conference’s Grey Tier.

“We do our best to give them a challenge,” Warrender said. “Usually we’re pretty successful. Last year, we did pretty good, gave them a challenge. They just got out ahead of us this year and kind of made it tough to come back and do things with it.”

NOTE: The Springfield victory was the 100th for Tigers head coach Justin Kosek. The public address announcer made the milestone known after the match.