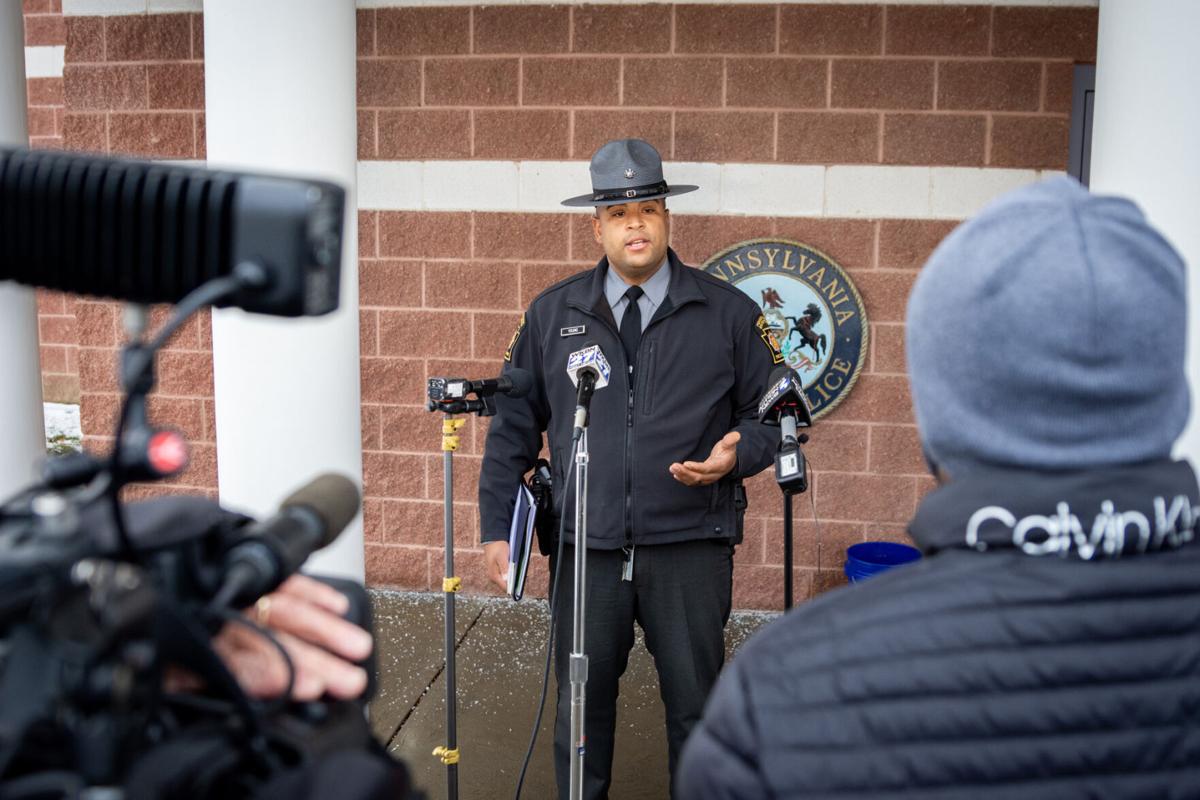 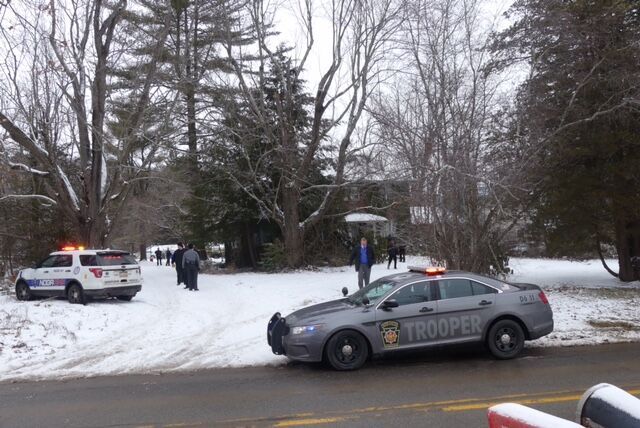 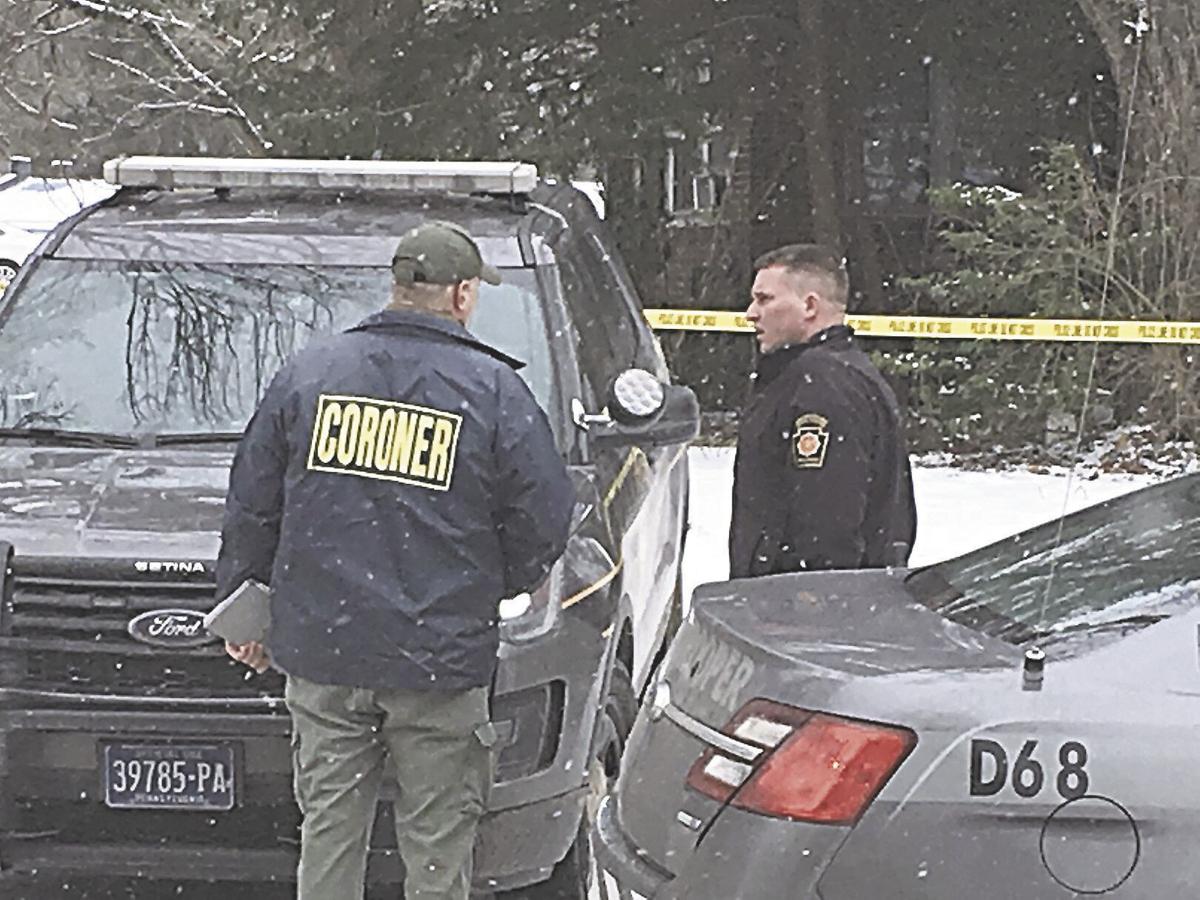 DEBBIE WACHTER | News Lawrence County Coroner Rich "R.J." Johnson talks with a state police investigator outside of a house in New Wilmington Borough, were a woman was stabbed and a borough officer shot and killed the man suspected in her death. 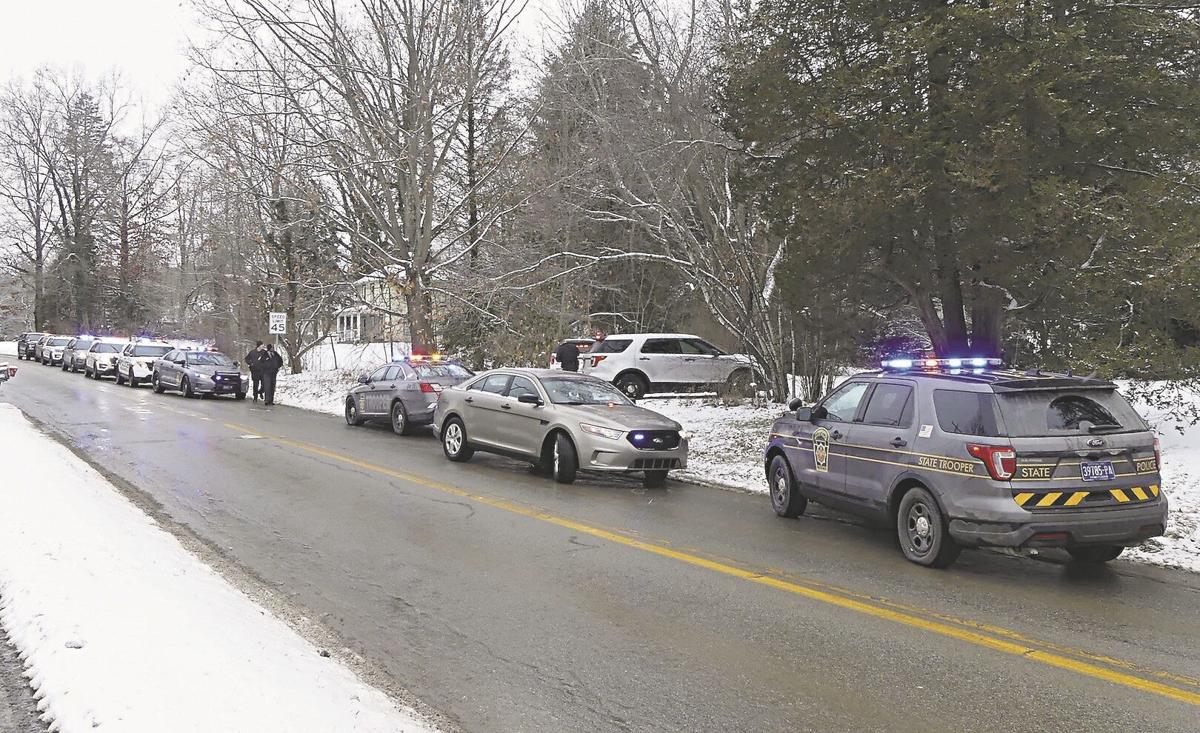 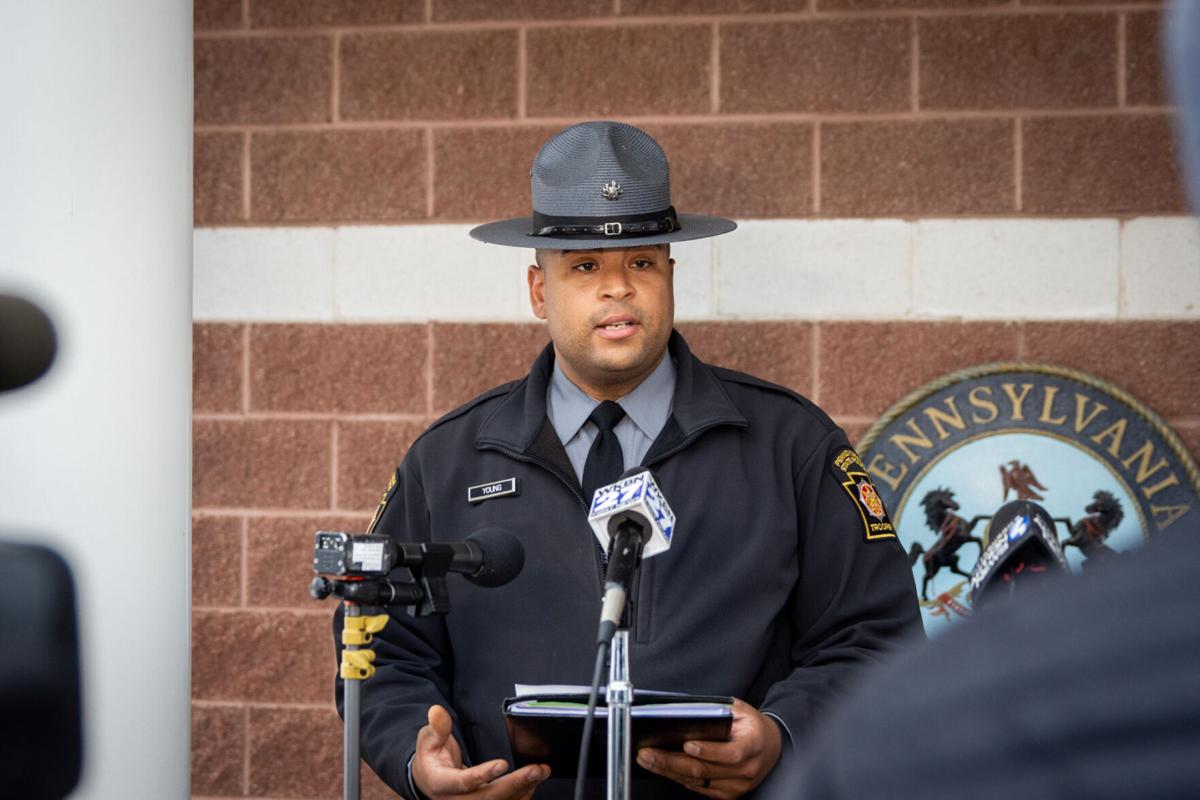 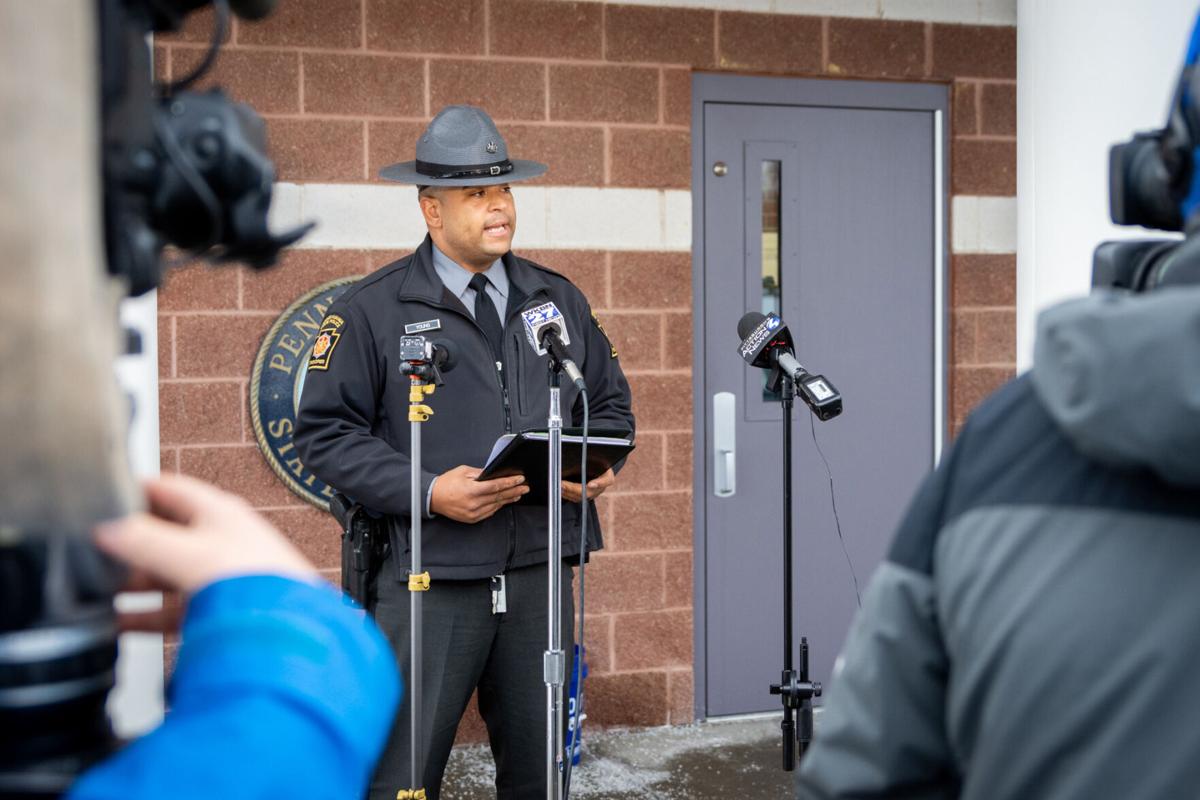 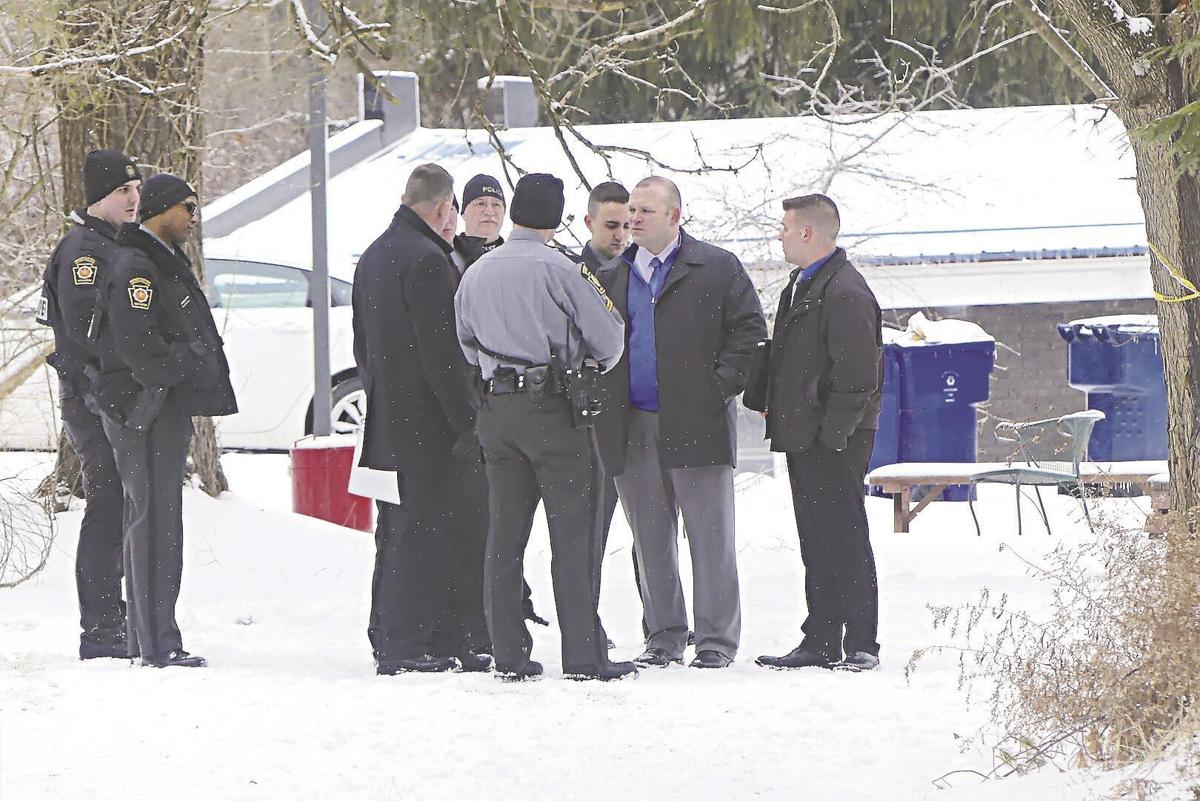 GARY CHURCH | News State and New Wilmington Borough police meet in conference outside of a house on New Castle Street following a stabbing death and shooting.

DEBBIE WACHTER | News Lawrence County Coroner Rich "R.J." Johnson talks with a state police investigator outside of a house in New Wilmington Borough, were a woman was stabbed and a borough officer shot and killed the man suspected in her death.

GARY CHURCH | News State and New Wilmington Borough police meet in conference outside of a house on New Castle Street following a stabbing death and shooting.

Man police shot had been in prison for killing wife

A woman stabbed during a domestic incident in New Wilmington has died from her injuries, and a borough police officer shot and killed the man suspected in causing her death.

According to state police at a news conference Thursday, troopers were called around 11:08 a.m. to the house at 524 S. New Castle St., where they saw a man assaulting the woman with a blunt instrument outside of the house. A borough officer ordered him to stop, but he ignored the officer's commands and continued assaulting her. The officer then shot the man with his service weapon, according to the police.

The two-story dark red brick house where both incidents occurred is directly across from the Westminster College president's mansion and next to The Grove nursing home. Cars from various police departments were lined along the road while police were responding to the incident.

The identities of the two deceased were still undisclosed late Thursday afternoon. Trooper Eric Young, who gave the account of what occurred, said their names are being withheld pending notification of their families.

The name of the officer also is being withheld, pending further investigation, he said. New Wilmington Borough police chief Carmen Piccirillo said the officer who shot the man has been placed on administrative leave, which is standard practice when an officer is involved in a shooting incident.

The state police took over the investigation and were at the scene for several hours into the afternoon.

Johnson had arrived at the house around 12:30 p.m. to pronounce the man dead while state police were processing the scene of the stabbing and shooting. He described the incident as it was relayed to him, noting that the man was lying behind the house when he arrived.

The schools in the Wilmington Area School District — because they lie inside the borough — were under lockdown at 11 a.m. for about half an hour, according to Superintendent Jeff Matty, Ph.D. "We were asked by local authorities to do a temporary lockdown because (the incident) was in the community. We do that for safety reasons. We didn't want people from the community going in and out (of the school buildings)," he said. He added that "the police did a nice job in helping the school."

The woman's death was the third homicide within the past 10 days in Lawrence County. On Feb. 6, 39-year-old Jason Miles was shot to death in an alley behind Marshall Avenue in New Castle. his accused killer, 37-year-old Jordan Perretti of Lathrop Street was arrested Tuesday.

On Wednesday, 33-year-old Lamar Johnson was killed by gunfire in a reported shootout with Markeace Devant Perkins, outside of a house on Grandview Avenue in Union Township. Perkins, 25, of 509 E. Moody Ave., has been charged with criminal homicide and he remains at large.

Man police shot had been in prison for killing wife

Juan Carter Hernandez recently had been released from prison in North Carolina for having shot his 20-year-old wife to death in July of 2011.